The Story Behind the Book | Mary Brooks Picken | Reviews & Testimonials

Although now almost unknown, Mary Brooks Picken was the American authority on domestic arts in her day. Born in a Kansas farmhouse in 1886, she was a granddaughter of pioneers. Mary’s sewing and design talent became apparent at a young age and she set off for a career in fashion that took her to Kansas City and later, Boston. In 1916 she founded The Woman’s Institute of Domestic Arts and Sciences in Scranton, Pennsylvania. The school was the heart and soul of Mary’s vision and combined correspondence courses with classroom instruction in dressmaking, millinery, cooking, fashion design, beauty, and homemaking. It attracted students from around the world as enrollment climbed to almost 300,000 women, making it the largest school in history devoted solely to the education of women. It reached thousands more through its newsletters and other publications.

Mary’s sole purpose, which deeply resonated with me, was to educate women, encourage their entrepreneurial spirit, and elevate the value of their work. Keep in mind that women could not yet vote, less than ten percent of women worked outside the home, and very few went to college. Vocational schools were thriving for young men, but women remained an afterthought in the American workforce. It was nothing short of amazing that Mary Brooks Picken achieved her goal.

The list of Mary’s accomplishments is dazzling; she wrote nearly 100 books on sewing, dressmaking, needle arts, and fashion, including the very first Singer Sewing Book. Mary taught at Columbia University, was the first woman to be named a trustee of the Fashion Institute of Technology, and was one of five original directors of the Costume Institute, now part of New York’s Metropolitan Museum of Art. Her success introduced her into the most prominent circles of her day and made her a celebrity in her own right. 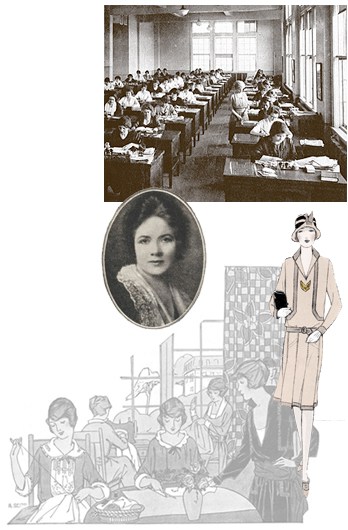